2009 Institute for Athletes in Retirement and Transition Conference

"Life after Sport: Athletes in Transition," May 29-31 in San Diego.
The main page for the conference is here.
Posted by Mike Austin at 10:49 AM No comments:

The 2009 BPSA Conference will be held from 26 – 28 March in the historic Dudhope Castle in Dundee, Scotland The castle forms part of the campus of the University of Abertay Dundee, and is ideally situated for visitor attractions such as golf at St Andrews, Carnoustie or Rosemount; whisky tasting tours; and visiting the Cairngorms National Park.

Abstracts are welcome from within any area of philosophy of sport including metaphysics, epistemology, aesthetics, and ethics, and from any relevant theoretical approach, including analytic, continental philosophy or critical theory. Submissions in related areas such as philosophy of the body; philosophy of health, philosophy of coaching; philosophy of Physical Education are also welcomed. Newcomers to the association may wish to consult the web site to see full details of previous conferences and books of abstracts: http://philosophyofsport.glos.ac.uk.

Abstracts should be 350-500 words long (including references). The deadline for submission is 12 December 2008. Abstracts must be submitted electronically to BPSA Vice-Chair Dr Andrew Edgar edgar@cardiff.ac.uk. Preferred format is MS Word. Contributors will be notified about the acceptance or rejection of their abstracts no later than 26 January 2009. Abstracts will be published in a booklet distributed at the conference and will appear before then on the BPSA website. Authors whose work is accepted for the conference are invited to submit their papers for review to the Association’s Journal, Sport, Ethics and Philosophy, edited by Dr McNamee m.j.mcnamee@swansea.ac.uk.

Further information about the conference programme, location, travel arrangements, etc. will be posted on the BPSA website as it becomes available. The local organisers will be Professor Steve Olivier and Ms Claire Morton, at c510586@abertay.ac.uk; telephone 0044 (0)1382 308727.
Posted by Mike Austin at 9:20 AM No comments: 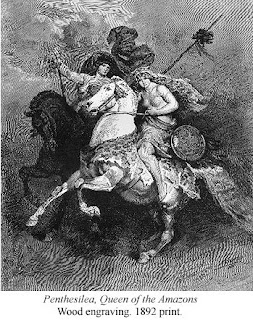 I have always loved mischief-makers.
In their paper “The genetic design of a new Amazon” Claudio Tamburrini and Torbjorn Tannsjo (or perhaps Pan and Loki?) claim that the fact that men and women are prevented from competing against each other means that women are sexually discriminated against in sporting arenas. Ergo, as such discrimination is unacceptable, women should be allowed to undergo genetic modification (when such procedures are safe) to allow them to compete with men, because “In sports it is crucial that the best person wins”. While I am very interested in what the readers of this blog think on the matter, I’m going to nail my colours to the mast right away.
Tamburrini and Tannsjo claim that (A) “If a female athlete can perform better than a male athlete, this female athlete should be allowed to compete with, and beat, the male athlete.” And (B) “If she cannot beat a certain male athlete, so be it. If the competition was fair, she should be able to face the fact that he was more talented. It is really as simple as that.” I agree fully with (A); of course, whether women would want to compete with males, or should be made to, is another question.
(B), though, hints at a problem that Tamburinni and Tannsjo seem to obfuscate. If female athletes are genetically enhanced, any competition against unmodified male athletes simply isn’t fair anymore. In what sense is a victory by an enhanced female athlete over an unmodified male athlete a victory for equality? Presumably, Tamburrini and Tannsjo are either going to allow male athletes to modify themselves in a similar way (so they too can try to be the “best person”), or they are not. If they do, the modifications of the two sexes would seem to “cancel each other out” in a kind of biotechnological arms race (har har), as each athlete attempts to be that best person. And if they don’t, that would seem to be… err… sexual discrimination. (In the background I can hear Derek Zoolander screaming: “Merman pop! I’m a mer-MAN!)

I do hope, though, that in my lifetime genetic enhancements eventually allow one to drastically and safely alter one’s body shape. I have always thought that forcefully preventing me from running in the Grand National was speciesism at its most extreme. How can they separate me from those magnificent thoroughbreds, while farmers and locust swarms compete for the lands produce? While apartment dwellers and foxes see who can squeeze into each other’s living spaces, and humans, dogs and squirrels run together unfettered in Central Park? I don’t enjoy the fact that the market assigns very little value to my present long-distance running and hedge-jumping times, and I would be quite prepared to risk any of the possible side-effects of equine semi-transformation. My hope is that after a few good races, I am put out to stud in a vineyard.
Posted by Carl Thomen at 4:13 AM 1 comment: