PhD Opportunity in the Ethico-legal aspects of Anti-Doping

At the Institute for Health Research, our research into the health and social sciences builds on our belief that high quality, high impact research must be based on strong collaborations with the community, the service sector and with centers within the University and beyond. In doing so we are able to drive forward the inter-disciplinary research necessary to provide real benefits to patients and other healthcare service users throughout the local, regional, national and international communities.

An excellent opportunity has arisen for an outstanding graduate to work towards a PhD through an investigation in the ethico-legal aspects of anti-doping policy and practice. This may cover one or more of the following:

· Ethico-legal aspects of sports physicians in relation to doping

· Harm-minisation versus punative approaches to anti-doping

The topic of the actual studentship will be negotiated with the successful applicant. In the first instance applicants should provide a two page outline of their proposed research idea.

Please also note that all studentships have the following eligibility requirements:

If you are interested in applying for any of these studentships then please submit a covering letter identifying which studentship you are interested in, and include a CV detailing research experience to-date, scientific interests and at least two references. This should be accompanied by any additional application documentation outlined in the synopses below. Successful applicants will then be asked to complete a University postgraduate application form at a later stage. The closing date for applications is 4th September 2009.

All applications should be sent to Mrs Karin Terry, Institute for Health Research, School of Health Science, Swansea University, Singleton Park, Swansea, SA2 8PP or by email to k.terry@swansea.ac.uk

Once we have processed all applications and have an indication of preference we will contact you with a possible date for interview. Should you progress to this stage interviews are scheduled for September and the studentships will commence early October 2009.

Should you have any queries about the studentships available then please contact the listed PhD supervisor or Dr Ian Pepper (i.pepper@swansea.ac.uk)

Posted by Emily Ryall at 2:23 AM No comments:

Wikiversity on Philosophy of Sport

This is of interest as a brief account of the history, current state, and future of philosophy of sport.
Posted by Mike Austin at 7:10 AM 1 comment:

Hours prior to the women's 800 meter final, the IAAF released a statement asking South Africa to determine the gender of their athlete, Caster Semenya. Semenya had already breezed through the semi-finals and was expecting a podium position in the final, but the timing of the IAAF statement was heavily criticised as wholly insensitive and unnecessary. The IAAF conceded that questioning the sex of an athlete is a very difficult issue but they appeared to demonstrate further insensitivity to Semenya by suggesting that she hasn't been accused of cheating as she may be unaware that she is not female.

Whether Semenya was aware of the media furore that was being created over the IAAF statement is not known, and fortunately it didn't appear to have a detrimental effect on her result in the final as she finished first, a full two seconds ahead of her nearest rival. But the effect that the statement and interest subsequently generated from it is sure to cause concern, not least to Semenya herself. Since sex and gender, in our society, is one of the most fixed categories since birth and one of the fundamental tenets of our identity (nearly everything we do is labelled by our gender) to cast aspersions on it is to challenge the very core of who we are. This whole case, unfortunately, highlights the problem with maintaining the binary categories of male and female; categories challenged recently by Gerald Callahan in 'Between XX and XY: Intersexuality and the myth of two sexes'. Callahan provides solid evidence that sex is a spectrum not a binary (or tri, if you want to include hermaphrodites) category. Taking Callahan's argument seriously would cause serious problems for international sport which relies heavily upon the premise that only two sexes exist. This accounts for the IAAFs awkward and clumsy defence of their statement when faced with what they view as a someone who doesn't fit the 'standard' mould.

This case highlights two issues; first, the problems that occur when we divide the world into fixed categories leaving no space for grey areas in between, and second, and more importantly, the insensitivity that is created when a real, feeling, human being is questioned over a core part of their identity based on such interminable categories. The IAAF needs to realise that whatever their rules and world view, athletes should still be treated with the respect and dignity that all sentient beings deserve. 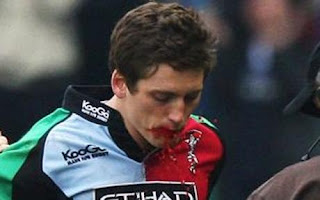 [Above: Vampire pin-up Tom Williams]
“They say that in war truth be the first casualty”
- Zack de la Rocha, One Day As A Lion: Wild International (with apologies to Aeschylus)
~
Dean Richards, former director of rugby at Harlequins has just been banned from coaching at a European level for three years. He “masterminded” a few (we can’t be sure how many) fake blood injuries for tactical reasons, the most notable being that of young Harlequins’ player Tom Williams.

Right, so he’s a cheat, he’s banned, good. But hearing former England captain Will Carling discuss the issue, one would swear we – coaches, athletes, sports media, starving refugees, the world – are just the victims of circumstance. God rolled the dice and we lost. I’ll just discuss three of Carling’s obfuscations.

“I’m shocked. But we must remember, rugby is played by human beings who sometimes overstep the mark.” (aka Poor Dean Richards syndrome)

Rugby, like war, is a business, the bottom line of which is winning. Richards was doing all he could to win. Moral outrage, much less surprise, should not take pride of place in a society that worships the primacy of performance. I don’t see the BBC doing 15-minute specials on the machinations and intrigues of an unjust war (by the way, how many young British men and women have to die before someone in the House of Lords asks exactly why democracy in Afghanistan is so damn important to everyone?). I would suggest (ala Mark Rowlands) that the real reason we feign surprise and indignation is that we can’t believe we were taken in (“And did you see how bright the “blood” coming out of that boy Williams’ mouth was?”)… And we can’t believe he got caught. In that sense, Carling’s words are almost Gandhian. We’re all human beings, so we get angry when one of us gets caught at it. Damn it Dean you moron, couldn’t you have been cleverer?

“I feel so sorry for Tom Williams. He’s just a young lad, and as we all know, when your boss at work tells you to do something, you do it.” (aka Poor Tom Williams syndrome)

A list of things your boss may have said to you:
“Undo these staples.”
“Phone [disgruntled customer’s name] and tell her about the delay.”
“If the fees negotiator calls, tell him we don’t do rebates. But if he threatens legal action, obviously we can make an exception.”
“If the fees negotiator calls, tell him I’m not in.”
“Put this fake blood capsule in your sock, and if we need you to, slip it into your mouth and bite.”
“Go to a country you have never heard of and kill people you’ve never seen for reasons you do not need to know.”

[Say loudly, and with a gusto that demonstrates how much respect you have for The Rules] “This will carry on unless Rugby wakes up and changes the rules! We don’t want to tarnish the great name of rugby etc.” (aka Poor Rugby syndrome)

Yes. That darn slippy “No Cheating” rule. Perhaps we should just print it twice, like the rules of Fight Club:

The First Rule Is: Do Not Cheat.
The Second Rule Is: Um…Do Not Cheat.
But Will raises an important existential question: How do you litigate a human nature frayed and distorted by a lust for the top spot on the podium, a psychology perverted by the impression that We Must Always Win? How indeed, Will.
Posted by Carl Thomen at 5:22 AM No comments: