Respect for Opponents and the Postgame Handshake 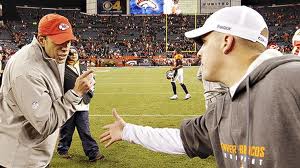 I've been thinking some lately about the practice of shaking an opponent's hand after a game, and wondering whether--as Randolph Feezell and Craig Clifford put it in Sport and Character--"...at the end of the game, should we always, without exception, attempt to shake the hands of our opponents (p. 36)?"

My intuition is to say that there can be morally justified exceptions to this practice. For example, as a player I would think it would be justified to refrain from this practice if an opponent has clearly intentionally injured one of my teammates. Or if an opponent consistently displays deep disrespect for the game, officials, and her opponents, is there something disingenuous about shaking her hand after the game?

Or take a case that is less clear, but one that I've been thinking about lately for personal reasons. As a coach in youth sports, am I obligated to shake the hand of my opposing coach if he or she spends the entire game berating their own players, criticizing the referee, and engaging in other patterns of disrespectful behavior?

The bottom line question is this:  Is the respect that is communicated via the postgame handshake dependent in some sense on how an opponent conducts themselves, such that there are times when it is appropriate to refrain from this tradition? Thoughts, anyone?
Posted by Mike Austin at 10:42 AM

What does the post-game handshake mean? What are the intentions of coaches and players when they choose to shake hands afterwards?

It seems that the worry is that the handshake could be a gesture of endorsement or acceptance of an opponent's problematic behavior...

The post-game handshake is respect for the game and for the spirit of competition, not for the specific person one shakes hands with.
It is essential for the coach to show his players that respect for the game is more important than any one person.
If another player or coach demonstrated poor sportsmanship during the game, then shake his hand at game's end...then later find a way to improve that persons behavior in private where authentic efforts can be used to cause improvement.
Public displays of protest will not be fully understood by all participants and only will serve to further disrespect the game.
Henry

I agree with you Mike (and disagree with Joan and Henry) in that we ought not to shake hands with someone who has deliberately engaged in violent or aggressive behaviour during the game. Otherwise we are effectively just condoning it. There is a difference between someone who consistently attempts to bend (or perhaps even break) rules in an attempt to give themselves an unfair advantage, and someone who behaves in a violent manner. The former can be seen as still maintaining the spirit of sport (though a slightly warped conception of it) and someone who thinks it acceptable to break the rules in such a way that can have serious and long term consequences for others. Perhaps it is a difference of degree then: I know players that really wind me up because they constantly undermine the rules of the game in the belief that it is up to the referee to catch them at it but I will still shake their hand. I also know other players who are just thugs and I have no intention of shaking their hand whatsoever.

Thanks for the comments so far. To me, it is fairly clear that not shaking the hand of a thug out to harm others is morally justified. I don't respect how they played the game, and in fact I deeply disrespect it. Now perhaps the post-game handshake involves respect for the game, as Henry points out. But then, when an opponent has disrespected the game, how does respect for the game entail that I must shake their hand? In the specific situation I'm thinking of in a soccer match, I've thought of just shaking the coach's hand and telling him his kids played well, then maybe or maybe not adding "But I don't respect the way you treat them, the officials, or the game." But perhaps in such situations, wisdom dictates restraint in the form of silence.

We discussed this in my Philosophical Athlete class and thought there were two levels of respect to be shown by the handshake.

Respect for the game is shown by the traditional gesture of teams lining up and shaking everyone's hands. This shows respect generally for the fact that opponents make the game possible.

On the other hand, gestures of special appreciation for individual opponents should be optional and contingent on whether the sense of respect is authentic and warranted by the individual's behavior in the game.

It's worth noting that these two kinds of gestures are not mutually exclusive. Players often seek out individual opponents to congratulate after the team handshake.

Requiring the handshake by rule is another important issue. One observation from a couple of wrestlers in the class is that different regions have different rules about whether and/or when you can shake an opponent's hand. Teams are penalized when an individual breaks the rule which makes the gesture more about not wanting to lose points than a sincere expression of respect.

If, as Joan says, motivations are important. The fear of losing points does not seem to be the proper motivation for a handshake.

If you only shake the hand of the opponent whose behaviour you respect then have you reduced it to an award that they will receive if they have lived up to your personal standards of behaviour? "I shook your hand, therefore I have approved how you conducted yourself today"..."I didn't shake your hand because I don't approve of your behaviour today". I am not sure if that is the point of the postgame handshake.

In the photograph that is used for this post it shows two coaches shaking hands. My question to add to the debate is, does the ethics of the hand shake differ depending on the hierarchical level of the team? Does the post-game hand shake mean something different to the coaches as opposed to the players?

This is not about the the post-game handshake but the Haka. Various rugby teams perform a Haka on the pitch right before the test begins. Haka are Maori types of dances that can be used for war dances also. Some people find Haka rude and unsportsmanlike. A few years ago the NCAA fined The University of Hawaii for doing a Haka right before one of its games on the football field.In my opinion the handshake, sumo wrestlers throwing rice and stomping the ring to scare away evil spirits, and Haka are all symbolic gestures that I find cool and should be done, what really matters is if they game was played according to the rules.

Follow up: I feel that the handshake is mostly a symbolic gesture. And that the punishment of unsportsmanlike behavior needs to be taken care of on the field by enforcement of rules, and fans need to speak up and let there teams know that they not put up with players that bring shame to there teams.

I am a basketball referee and find that some teams starting 5's will walk onto the court to start the game and shake hands then. I observed last week one team attempt to shake hands at the start of a game and being flatly refused by their opponents. So surprised was the hand-shaking team, that they sought out the non-shaking hand of a player which was again refused and then the players starting pushing and shoving.

I like the idea of a hand shake to start a match - a sign of mutual respect for opponents, officials and the game - and to see such distain and aggression at the beginning of a match shocked me. Needless to say, it set the tone for the game...

This reminds me of the tip I leave after eating out to lunch. It is a gesture that has its history in a personal expression of one's experience with the match/meal and appreciation for those who worked to make it possible, but it seems to have evolved into an almost obligatory ritual. Some opponents are better than others, and so too with servers, but I for one tend to shake or tip them all about the same. It would take a gross departure from sportsmanship as mentioned (or a positively antisocial waiter) to forgo the action but I suppose I reserve that option for some cases. If not, then it's not really a voluntary action and it seems to undermine itself when codified in the rules(think "mandatory gratuity"). Though refusing either as a protest makes a pretty blunt implement and should probably be reserved for only the most egregious offenses - cheating, gambling conspiracy, violence, cold fries...