As if winning at an elite level was not already hard enough, it appears that there may be some sort of relationship between physical attractiveness and victory. (HT: Rob Sica for making me aware of this.)
Posted by Mike Austin at 6:46 AM 2 comments: 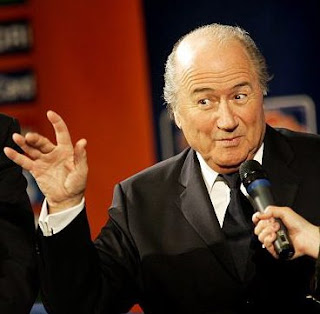 But the backdrops peel and the sets give way and the cast get eaten by the play, there’s a murderer at the matinee, there are dead men in the aisles... And the patrons and the actors too are uncertain if the show is through, and with sidelong looks await their cue... But the frozen mask just smiles.
“The Vicious Cabaret”, Alan Moore – V for Vendetta

If there exists a divine comedy in sport today, it must surely be football. Okay, perhaps not ‘divine’, and not football the game you understand, but Football the Theatre. All the world’s a stage for the slapstick ineptitudes of FIFA, UEFA and their assembled minions, and unlike the World Wrestling Federation, they seem not to realize it. To its credit, the WWF at least challenges the proverbial idea of a lack of honour amongst thieves. And at least what Vince McMahon says, goes. No such luck at Football’s Cirque du So Lame.

Arsenal’s Eduardo was recently banned from European competition for diving to win a penalty against Celtic in the Champions League. Arsene Wenger (and no small number of other people) then complained that banning Eduardo in that way sets a dangerous precedent; the UEFA Igors would then have to watch every competitive match played in Europe in order to punish other players in a similar fashion. The unerring logic of this didn’t escape UEFA twice, and it overturned the ban it had imposed on Eduardo.

Chelsea were recently banned from signing new players until 2011 after it emerged that they had induced French teenager Gael Kakuta to sign with them illegally, breaking the terms of his contract with French club Lens. The Court of Arbitration for Sport has subsequently suspended the ban.

And finally, Sir Alex Ferguson was fined £20,000 and handed a four-match (two suspended) touchline ban for calling referee Alan Wiley “unfit” during Manchester United’s 2-2 draw with Sunderland in October. That equates to about a quarter of a week’s wages and the inability to sit next to his assistant during the games. He can, however, sit behind the dugout, all of three extra feet away from his squad.

In the immortal words of Derek Zoolander, “WHAT IS THIS?” A toothless sports association following a policy of appeasement on all fronts in an effort to maintain the illusion of its necessity, or an honest collective struggling under the weight of expectation in the modern version of the world’s game? As the football powers-that-be continue to struggle to make head or tails of the diving problem, the respect problem, the technology problem and the money problem, what emerges from the Stella Gallery is a strangled cry for a rational decision unfettered by the interests of billionaire owners or megalomaniac managers and a myriad of clowns and jugglers. Stop the music, kill the laugh track... and please, Madam Justice, take off that ridiculous wig.
Posted by Carl Thomen at 6:47 AM 3 comments:

Criticisms of Philosophy of Sport

In the past year, I've encountered the view that philosophy of sport is not "real philosophy," meaning, I take it, that sport is not a topic worthy of philosophical reflection, or that it is not "philosophically interesting." This got me to thinking that I'd like to read a good defense of philosophy of sport against such charges. However, I've been unable to find an extended defense. So, I'm thinking about writing one, and this post is a call for assistance. I'd like to know any references in print that criticize or dismiss philosophy of sport. I don't think there are many in print, as it is more of an attitude that many hold rather than something they have written about. However, if you're aware of any, please post in comments or email me directly (mikedotaustinatsymbolekudotedu).
Posted by Mike Austin at 6:10 AM 12 comments: