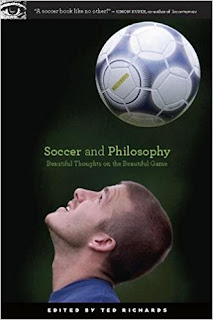 I'm team-teaching a course in our Honors Program this semester, "The Philosophy & Politics of Soccer." We cover a lot of different issues, but recently we discussed the morality of negative soccer vs. playing beautifully, using two chapters from Soccer and Philosophy: Beautiful Thoughts on the Beautiful Game, edited by Ted Richards.

1. The game is won by the team who commits fewer errors.
2. Football favours whoever provokes more errors in the opposition.
3. Away from home, instead of trying to be superior to the opposition, it’s better to encourage their mistakes.
4. Whoever has the ball is more likely to make a mistake.
5. Whoever renounces possession reduces the possibility of making a mistake.
6. Whoever has the ball has fear.
7. Whoever does not have it is thereby stronger.

In contrast to this, in John Cross's biography of Arsene Wenger, Arsenal's manager is quoted as follows:


“Let’s not forget you can win and lose playing with different styles. I believe the big clubs have a responsibility to win—but also to win with style. I believe our sport has moved forward a lot on the physical side, tactical side but we must not forget the values that it carries through the generations. One of them is the vibe coming out of team going into the stand…I always like to think that the guy who wakes up in the morning after a hard week of work has that moment, that fraction of a second, when he opens his eyes and says: “Oh, today I go to watch my team.” I like to think it makes him happy, he thinks he can maybe see something special. We can’t guarantee that, but we have to try…It’s amazing the effect you can have on people’s lives" (p. xi).

So what's wrong with negative soccer? According to Stephen Minister in Soccer and Philosophy, it involves an entire team giving up on the pursuit of excellence. Parking the bus, getting stuck in, and taking no risks eliminates or greatly reduces a lot of what is beautiful about the sport. Players and teams are inhibited from freely expressing their creativity.

While I prefer attacking football to parking the bus, I think more can be said in defense of negative tactics. For example, it takes great skill and patience, as well as discipline, to play a defensive game well. Excellence can be demonstrated by neutralizing a team with great attackers. And surely there is something of beauty and excellence in a lethal counterattack. So while at the end of the day I agree with Wenger and Minister, I think more can be said for the excellence on display when a soccer team uses negative tactics.
Posted by Mike Austin at 7:13 AM No comments: