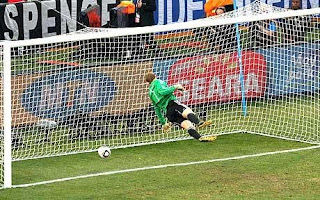 Following an obvious (to all but the referee and line judges) but disallowed goal by Frank Lampard in England's 4-1 loss to Germany in the Football World Cup, FIFA's president Sepp Blatter has now accepted that there may be a place for goal line technology. The argument given by FIFA in the past is that such technology would unduly disrupt the flow of game and possibly prevent the opposition scoring from a counter-attack. However, as was often seen in other sports that are now using technology to determine outcomes, when replays of events show within seconds whether the officials have made the correct decision, it is the refusal of governing bodies to embrace its use that undermine the authority of officials and not the other way around. However, whether FIFA are serious about reconsidering their position that they so definitively took in March, or whether they are merely trying to sooth the sore feelings of those on the receiving end of an incorrect decision is up for question, as they have also said that instant replays of controversial events should not be shown on the big screen. It follows a goal by Tevez for Argentina against Mexico which stood despite Tevez being considerably off-side before he played the ball. It led to confrontations between opposing players after it was immediately shown on the big screen in the stadium. If technology was used to assist the making of decisions then this ruling would not be necessary.
Interestingly enough, I am always surprised by the way in which my students tend to side with FIFA's position on this. The reason they give for not implementing goal-line technology? That controversial goals and decisions provide something for them to argue about in the pub after a game. If they really want subject to argue about, then I can think of much better ones...
Posted by Emily Ryall at 5:10 AM 7 comments:

Readers may be interested in the online debate from Oxford University regarding the question of allowing performance enhancing drugs in sport. Professor Julian Savulescu uses the example of the Tour de France to support his proposal for allowing the use of (some) doping methods whereas Dr John William Devine rejects this on the grounds of undermining the integrity and value of sport. It is proving to be an excellent example of philosophical argument in action and on a subject that fires the interest and opinion of many of us in the general population.
You can view the whole debate here and are also able to join the debate and provide comments of your own.
Posted by Emily Ryall at 11:07 AM No comments:

Readers of this blog may be interested in three recent posts at my blog at Psychology Today, Ethics for Everyone:

How can character be built through sports?
Posted by Mike Austin at 10:22 AM No comments:

Email ThisBlogThis!Share to TwitterShare to FacebookShare to Pinterest
Labels: public philosophy of sport

Readers of this blog might be interested in the blog Sport and Society, which includes "Commentary about sport from the Center for ETHICS*, University of Idaho, the leading research center in the world in curriculum development and research about moral reasoning and moral development of athletes and coaches."

Recent posts include:
How do we justify pay for football coaches?
Reflections on John Wooden's Coaching Style
Would you cheat for $385,000?
Posted by Mike Austin at 6:51 AM No comments:

Email ThisBlogThis!Share to TwitterShare to FacebookShare to Pinterest
Labels: blog

A Robust Definition of a Sport

In doing some reading in another context, I came across the following minimum criteria for something to be a sport:

“An activity is not a sport unless there are challenges to be overcome and a clear set of rules about how to confront these challenges.” -- J P Spiro (2008) Defending the Master Race: Conservation, Eugenics, and the Legacy of Madison

This was offered as a way to distinguish a "sportsman" from a "market hunter" in the US in the late 1800s. But it got me to wondering if it has a more general application. Clearly, the two criteria--challenges and clear rules--are not sufficient to define a sport, but are they necessary?

I am sure that ground has been broken on the question of what makes a sport a sport, so pointers to that literature would be greatly appreciated.

Email ThisBlogThis!Share to TwitterShare to FacebookShare to Pinterest
Labels: Definition of Sport

As reported on Oxford's Practical Ethics:

Over the next month Oxford Online Debates will be tackling the motion "Performance enhancing drugs should be allowed in sport". We will try to collect together relevant materials and blog posts below in this special edition.

Moderated by Roger Crisp, who in his opening statement writes, "Taking drugs to improve one’s sporting performance seems, on the face of it, a paradigmatic example of a wrong action. It combines two activities usually considered shameful: the use of banned substances, and cheating."

"But on closer inspection the issue is more complicated," Crisp continues. "The use of some drugs, such as nicotine or caffeine (both of which might enhance performance in some cases), carries little or no stigma, and the charge of cheating would be inappropriate were the drugs in question explicitly permitted."

Should be an interesting discussion.
Posted by Jim Tantillo at 5:46 AM No comments:

This might be of some interest to those in the London area:

An Amateur in a Professional Game: Sir Harold Thompson FRS, the FA and English Football

Sir Harold Thompson (1908-1983), as well as being a distinguished physical chemist and Foreign Secretary of the Royal Society, is an important but neglected figure in the history of English football. He is perhaps now best remembered in terms of his association with the failure of the England national team in the 1970s; as the man who played a key role in the sacking of Alf Ramsey as England manager in 1974 and the vetoing of the appointment of public favourite Brian Clough in 1977.

If we delve a little deeper, however, Thompson’s footballing biography is revealing of the changing traditions and priorities of the English game in the post-war years. Based on the personal papers he left to the Royal Society, this talk will examine Harold Thompson’s life in, and influence on, English football and the Football Association. It will discuss his amateur background and his role in the foundation of the combined Oxford and Cambridge Universities side Pegasus FC; his contributions to international football politics and the development of a national coaching infrastructure during the 1970s; and his rise to influence and power at the FA, culminating in his chairmanship between 1976 and 1981.

To reserve your seat at this free event please contact Rupert Baker (rupert.baker@royalsociety.org). Audience members are very welcome to stay on afterwards for a live screening of the opening game of the World Cup, South Africa v Mexico, which kicks off at 3:00pm.

The Royal Society's Library and Archives are closed until June 2010 as we undergo an exciting redevelopment - please seehttp://royalsociety.org/library for more information.

The commentary on last night's Detroit Tiger game--the perfect game that wasn't--has been terrific, including comments by fans made on the CNN site ("Selig to Examine Umpiring, Replay After 'Perfect' Error"). In response to one fan's argument that "IF Selig overrules the call – the batter is out, he loses his 'hit' and the perfect game is intact. The batter that followed him then gets his at bat (and out) taken off the books as the game was already over," a fan identified as Mutt2000 writes in response:

"I disagree. You don't fix a mistake by pretending it didn't happen (just doing it again). You fix a mistake by doing something proactive to right the wrong that was done. Sports are important because they teach life lessons on how to function as a society. If we introduce the life lesson of 'that one didn't count', , , , then we lower the standards by which we perceive truth and fairness. June 3, 2010 at 2:31 pm"

Love this debate . . . what do baseball fans have to say about expanding the role of instant replay to overturn umpires' calls in baseball?
Posted by Jim Tantillo at 6:38 PM 5 comments: