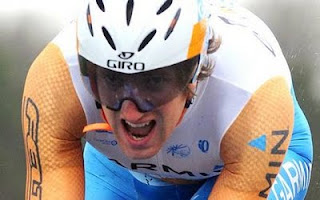 Over the past year or two, I've become much more interested in the sport of cycling. And I've become a fan of the Garmin-Slipstream team, for several reasons. One of those reasons is their explicit, public, and verifiable commitment to "clean cycling." Of course, it's no secret that one of the big revelations of the Tour de France was the emergence of Bradley Wiggins as a serious stage racer demonstrated by his overall 4th place finish. In light of the anti-doping stance taken by Wiggins and his team, his blood profiles have been made public. I wonder if this is the path other sports will have to take to retain their fans, at least the ones who care about whether or not their favorite athletes and teams are using performance-enhancing substances. This does raise issues related to the privacy of athletes, and of course there is the problem of techniques that can evade detection, but I wonder if the integrity of sport will require this sort of thing, as long as the bans against doping are in place?
Posted by Mike Austin at 8:40 AM 3 comments:

For a time, Michael Vick was one of the most exciting quarterbacks to watch in the National Football League. Many thought he would redefine the position. Of course, since then his moral and legal troubles have been widely reported on and discussed ad nauseam. Vick has now been reinstated in the NFL on a conditional basis, with full reinstatement a possibility. Professional athletes commit all sorts of crimes, and are allowed to play. I'm interested in what people think about Vick and any other athlete who is convicted of a serious (i.e. harmful to other sentient beings) felony. It seems that the current commissioner of the NFL has a policy of being more strict, so to speak, about these sorts of cases, though he has conditionally reinstated Vick. Why might the NFL be justified in not reinstating Vick, or athletes convicted of assault, spousal abuse, and so on?
Posted by Mike Austin at 9:26 AM 3 comments:

Information about the upcoming conference of the International Association for the Philosophy of Sport can be found here.
Posted by Mike Austin at 7:04 AM No comments:

Email ThisBlogThis!Share to TwitterShare to FacebookShare to Pinterest
Labels: IAPS 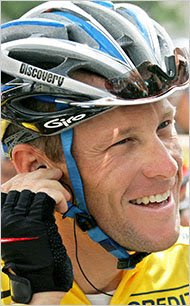 VeloNews has an article on the growing opposition to the ban on race radios for 2 stages, including tomorrow's stage from Limoges to Issoudon. According to the article, "Two-way radios were first introduced into the peloton by Armstrong’s former Motorola squad in the 1990s and have become a crucial element of team tactics; managers communicate with riders, who race with earpieces, to advise on strategy, approaching hazards and other important information." Critics complain about the predictability that the radios foster regarding race tactics.

On other hand, Lance Armstrong states that “Technology evolves, the bike evolves, the training, the diet, everything evolves… the fabrics that we wear. Look at [reporters’] cameras, the microphones… the transponders on the bike… all of it has evolved. So we are going to go back to a place where directors will have to ride up into the peloton to give orders to riders. That is not a good thing. I remember those days, I have been around long enough to remember them, and that is stupid too. A few of the guys think it is a cute idea, but I don't agree.”
Others who support using the radios argue that it keeps the riders safe, as an oil spot on a treacherous descent can be pointed out and injuries thereby avoided.

In response to these points, consider Matt White's view (White is team director for Garmin-Slipstream):
"I’d rather we banned radios. I don’t mind if we lost radios altogether. We go through the stage everyday in the morning, and what I am telling them on the radio is only what I’ve told them in the morning, just reminding them. The Garmin units have nothing to do with the radios; we have more information on their bikes than in their ear anyways… The only difference (without radios) is that I’m not telling them in the race. We have the same tactics, the same plan before, and the boys have to think and act themselves. That’s like cycling was 10 years ago. Whatever the Tour decides, just go with it. I think it’s a bit strange doing one day. I’d rather do no radios or all radios, but as for safety issues, I don’t really see that as a problem either. The amount of times you actually tell riders there is something dangerous on the road it just creates more stress because everyone knows about it. The guys are riding five or six hours a day, you can’t point out every dangerous bit of the road, so I don’t think it’s a real safety issue. I think some of the younger guys have struggled thinking about it. They are so used to being told what to do, they aren’t used to thinking for themselves, and I think that’s going to hurt some teams more than others."

I tend to agree with White, mainly because I'd like to see the riders demonstrate some of the intellectual aspects of athletic excellence that the radios can at least sometimes prevent. But perhaps this could still occur if the riders are involved in strategy sessions prior to the race, and simply communicating with their directors about which strategy to follow given the particular circumstances that arise in a given stage?
Posted by Mike Austin at 5:13 PM 2 comments: